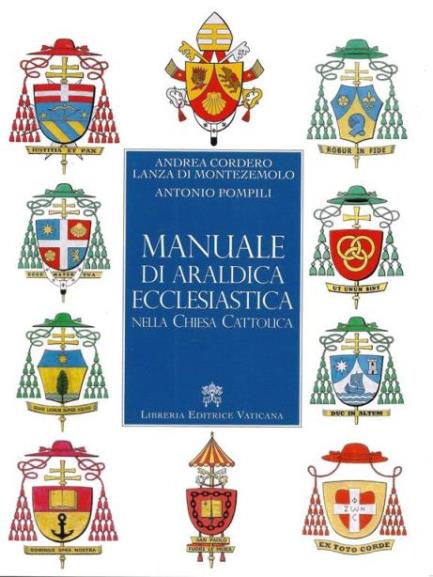 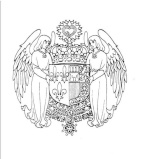 Spoiler:
the purpose of this elegant illustrated volume, state the authors in their Introduction, is “to help those who wish to know and to use such language to understand, read and interpret an ecclesiastical coat of arms, or to make up new coats of arms correctly.” The use of ecclesiastical coats of arms, in fact, “was never imposed, or prohibited, but abundantly used, particularly in the last centuries.”

“Heraldry is a language,” explain the authors. “And ecclesiastical heraldry is a branch, or a chapter, of general heraldry.” It considers the coats of arms of ecclesiastics or of particular ecclesiastical entities and, through symbolical elements, “it must present in a simple and immediate way the qualities and characteristics of the person.” It has its own “grammar,” “syntax” and “vocabulary.”

After an introductory chapter on the history and norms that regulate heraldic uses in the Church, each of these aspects is addressed.

In the chapter on “grammar,” the shield and its composition are examined: “In general two symbolic elements appear in the shield, which relate to personal or family aspects, or those that represent  the ideal, inspiration and program of life of the person himself. Featured, instead, around the shield are acquired elements, or not native, which indicate the category, the holy order, the dignity, the degree, the membership in an Order or in a religious institution, or sometimes something other.”

In the chapter on “syntax,” indications are given about the relations between the elements of the composition of an ecclesiastical coat of arms.

Taken into consideration finally is the “vocabulary” proper to heraldry, with the principal rules of “blazonry” (the verbal description of a coat of arms through the lemma and the phrasing proper of heraldry).

It is followed by a “Glossary,” which gives a vast picture of more than 1500 terms of heraldic language, and a rich bibliography. Also presented and described are the coats of arms of several Cardinals, Bishops and Patriarchs and, in great depth those of Popes John Paul II, Benedict XVI and Francis.

Among the previews and the curiosities contained in this publication, there is also the coat of arms of the new Cardinal-designate Pietro Parolin, Secretary of State, and a study, with several graphic theories, for the coat of arms of Pope Emeritus Benedict XVI, whose papal coat of arms was made in 2005, in fact, by the then Archbishop Montezemolo, who over several decades has elaborated the coats of arms of numerous Cardinals and Bishops.

During the preparation of the volume, the Vatican said Benedict XVI “expressed to the author his profound pleasure and gratitude for the interesting study he received, and made it known that he prefers not to adopt an heraldic emblem expressive of the new situation created by his resignation from the Petrine ministry.